Are Capital One Cafés a Blueprint for the Modern Branch?

"Finance will be the most disrupted industry in the next 10 years," said Peter Diamandis, executive chairman and co-founder of Singularity University, at the Exponential Finance conference in New York City in 2015. "Bank branches will most be gone ... this decade," he said.

He may be right. Since 2010, the retail banking industry has been closing down between 1,000 and 1,750 branches every year. Whilst mergers and consolidations account for some of the closures, the rise of mobile banking, of course, has played a significant role in the disruption.

According to research from Bain & Co, the percentage of consumers using their bank’s app leapt from 32% to 52% between 2012 and 2015. In terms of cutting costs and maximizing profits, this may seem like good news for banks – Bain estimates that every interaction a consumer has with a teller or agent at a call center costs the organization $4; by contrast, mobile interactions cost only 10¢ each. Surely, then, the future is clear: Get rid of branches, and encourage more users to make the digital shift.

There’s more to the story, however – mobile adoption now seems to have plateaued. In 2016, the percentage of consumers using their bank’s app grew just 3%, indicating that those who were most naturally inclined initially to migrate (millennials, perhaps), have already done so. Indeed, in a separate survey by Bain – encompassing 137,000 consumers in 21 countries – it is revealed that mobile banking growth is now levelling off in many countries (and actually declining in China).

So here we have a dilemma. Does a bank continue to close its branches and keep its fingers crossed that branch traditionalists make the shift to digital? Or does it revamp its branches and give consumers a new reason to set foot through the doors?

The former option certainly comes with risks. Bain found that nearly one-third of US consumers either switched banks or started using a different financial institution after their main branch closed. That certainly doesn’t bode well for profits. So what about revamping those branches?

Traditionally, branches have been used to provide a place for customers to conveniently transact and manage their accounts. True, the branch has been a driver of sales as well, but, primarily, they’ve been about deposits and withdrawals. But this model has now gone through a drastic change. With the rise of digital banking – which is mostly used to conduct simple transactions – people are visiting their branch less frequently.

Importantly, however, this doesn’t mean that consumers don’t need them anymore. Most people still prefer to hold a conversation in-person about certain more complex financial services and products, which means that they need somewhere they can go to do just that. And indeed, while intuition may try to convince us that millennials are surely the cohort that are fleeing branches in the greatest numbers, 60% still find value in them.

Putting it all together, simply shuttering all branches is clearly not an option – at least not in 2017. Consumers still want them, need them, and value them, and to do away with branches would be to disregard the valuable growth opportunities they present entirely. And so, today, the challenge for banks is to provide a branch that continues to meet the needs of customers who still value their services, yet offer something different – something additional, perhaps – that will increase footfall and deliver new opportunities to drive new sales.

Capital One has one such strategy to reimagine the branch – turning them into cafés.

And this isn’t being done by any half measure. Entering a Capital One Café branch is more akin to a visit to Starbucks or a restaurant than it is to a bank. Well… almost.

Capital One Cafés are fitted out for relaxation and comfort. Customers are served coffees and pastries while “ambassadors” come along to discuss their personal finances. There are couches and private corners, where the ambassadors coach people though things like applying for credit cards, setting up an account, or paying bills online. Capital One describes the cafés as places “where people can recharge their mobile devices and perhaps their understanding of finance.” 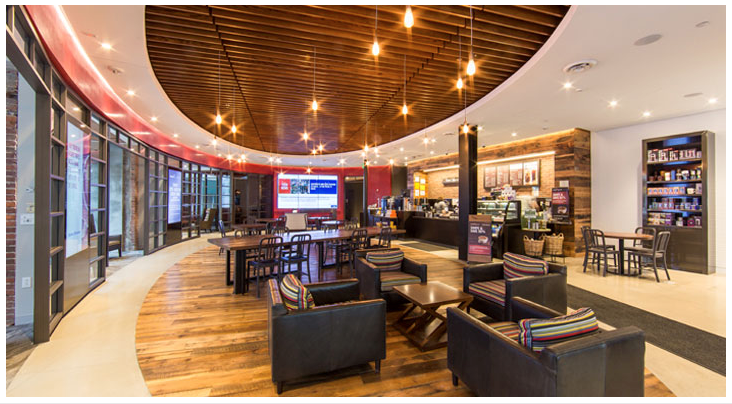 Antonio Wilson of Capital One’s Chicago Café explains that the object of the outlets is to build new customer relationships and retain existing ones. “Our goal as a company is to reimagine banking in a different way. The café approach fits in with this. The goal is to get people to come in for coffee or pastries. This is not a place where they feel like they are instantly going to have a banker in their face talking about our products. So initially, people use the site as a full-fledged café. Over time, though, they might bring up the conversation with our on-site bankers about our products.”

Capital One has no shortage of apps and online services that meet the needs of the modern, digital customer. Users can head online and deposit money, make payments, access their credit scores, create budgets – and they can do so on their mobiles if they wish. And these internet-enabled services, of course, are the imperatives of the Digital Age. Consumers have changed the way they want to bank, and so banks must change, too.

But banks still need to provide a human presence – and that means branches. Mike Friedman, Market Lead at Capital One, says that Capital One Cafés deliver those human connections the way that customers want them delivered.

“We have all the tools that allow us to be a great online bank, but then we have our ambassadors in the café who can focus on human connections rather than sales quotas,” he said. “It’s a lot more than just providing the community a coffee shop. It’s about allowing the café to provide those human connections.”

Today, it’s a simple fact that consumers are conducting more and more of their everyday banking online, and are spending less time in their branch as a direct result. However, they are reluctant to relinquish face-to-face connections entirely, and the Capital One’s Café-branch solution seems to be bridging the gap. Indeed, Capital One is planning to expand its café concept – which began tentatively at first more than ten years ago – with more locations planned in cities across the US, including Chicago, Boston (where there are six already), Seattle, Denver Richmond and South Florida. This doubling down on efforts undoubtedly indicates that this publicly-traded and digitally-savvy company believes it is now onto something. The last word goes to Mike Friedman.

“Our customers expect the digital tools that allow them to bank wherever they are. But they also expect to have a person to talk to when they need it. The cafés are a unique opportunity to present a physical manifestation of our brand and take this as an opportunity to connect with customers on their terms.”

Make sure to also download the CXFS agenda to check out all of the great activities, speakers, & sessions planned for this year.

*Processing your payment may take a moment. Please click submit payment only once, and do not refresh this page. Doing so may result in your credit card being charged more than once.

We use cookies and similar technologies to recognize your visits and preferences, as well as to measure the effectiveness of campaigns and analyze traffic.
To learn more about cookies, including how to disable them, view our Cookie Policy