brought to you by WBR Insights

While big banks like JP Morgan Chase and Bank of America have the spend and resources to innovate mobile banking almost on the fly - winning the loyalty of thousands of new mobile customers in the process - smaller regional banks can find themselves struggling far behind.

And this was exactly the position that First Tennessee Bank found itself in just a couple of short years ago - and it quickly realized that a drastic digital overhaul was in order. "It's almost impossible for us to stay anywhere near competitive," Kevin Karrels, Digital Channel Strategy SVP for First Tennessee Bank, told Bank Innovation in an interview last year.

Despite the fact that First Tennessee Bank is renowned for providing a first-class service (it was one of American Banker's 10 most reputable banks in 2017), today, if the mobile banking offering doesn't match up, it's simply impossible to meet the growing expectations of digitally-savvy millennial customers.

Going Beyond the Basics

Karrels had served in the retail segment at First Tennessee for 14 years before he joined the digital team. And when he did so, he immediately recognized the mobile banking experience for the bank's connected customers simply wasn't up to scratch.

"The mobile app was decent, but lacked anything beyond the basic functionality," he explained. "But now there are more and more mobile-only users, the segment of the population that is digitally centric. And we had to cater to them better."

Of course, First Tennessee has nowhere near the resources available to it that the likes of Chase and BofA enjoy. And that means that there simply isn't any leeway for a major mobile banking update to fail - it has to be right first time.

"We don't have the budget to keep up with banks spending 10 or 100 times more than us per year [in digital]," Karrels said. "But we still have to be competitive in digital."

And so, in order for a regional bank like First Tennessee to create a competitive mobile banking experience for its customers, forming a partnership was the only viable option.

After conducting an extensive review of the solutions available that would support its mobile banking ambitions, First Tennessee eventually selected a relatively new entrant in the FinTech space - D3 Banking.

Founded in 2008, D3 Banking provides a digital innovation platform, upon which a comprehensive set of financial services can be built at scale. Initially, First Tennessee went live with D3's online banking platform in the summer of 2016, and then followed up with the mobile banking platform in July last year.

Using D3 Banking's infrastructure, First Tennessee customers now have access to a full suite of functions that customers have come to expect from a mobile banking app - including personal financial management tools and automatic transaction categorization that enables users to better understand their financial positions and spending habits.

The new mobile app also uses analytics to help First Tennessee target customers with personalized, relevant offers that anticipate their needs. Using the D3 platform also means the bank will have ready access to future innovations such as wearables and biometrics as these things become more prevalent. In fact, First Tennessee launched an Apple Watch application at the same time as the mobile app. Though at present it is only for basic banking needs, this still represents a strong commitment from the bank to keep up with how even small segments of its customer base want to interact with First Tennessee. 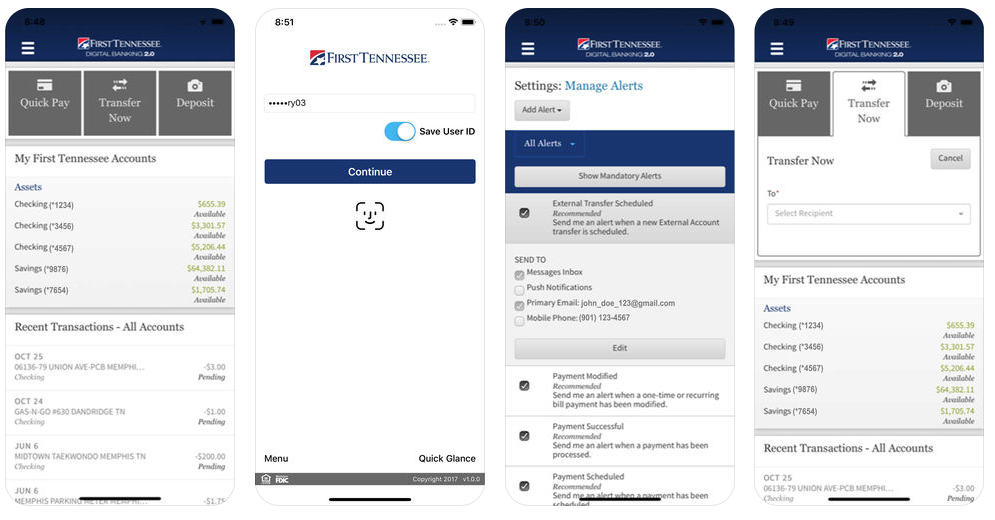 "Simply replacing outdated online and mobile banking solutions is no longer a viable option for financial institutions that want to compete successfully today and in the future," said Mark Vipond, CEO of D3 Banking. "That's just the price of getting to sit at the table, not a winning hand. Some institutions, such as First Tennessee Bank, understood this early on and have taken the steps necessary to enable the deployment of innovative services and capabilities required to be competitive over the long haul. These institutions will be the ones well positioned to attract and retain customers as the digital revolution heats up."

Placing your eggs in a less-established vendor's basket is always a risk, but First Tennessee Bank's venture with D3 Banking is indeed paying off. Taking a much bolder approach than the average regional, the move has enabled First Tennessee to deliver updates to its mobile banking service quickly, and provide an app with the functionality that its customers expect.

"Since going live with the D3 online solution, we've seen a five-percent year over year increase in online banking usage and we expect to see strong results from mobile as well. D3's digital platform allows us to provide the seamless, consistent experience our users want, backed by the flexible, scalable architecture we need to continue to grow, evolve and fortify our market position."

Download the agenda today for more information and insights.

*Processing your payment may take a moment. Please click submit payment only once, and do not refresh this page. Doing so may result in your credit card being charged more than once.

We use cookies and similar technologies to recognize your visits and preferences, as well as to measure the effectiveness of campaigns and analyze traffic.
To learn more about cookies, including how to disable them, view our Cookie Policy